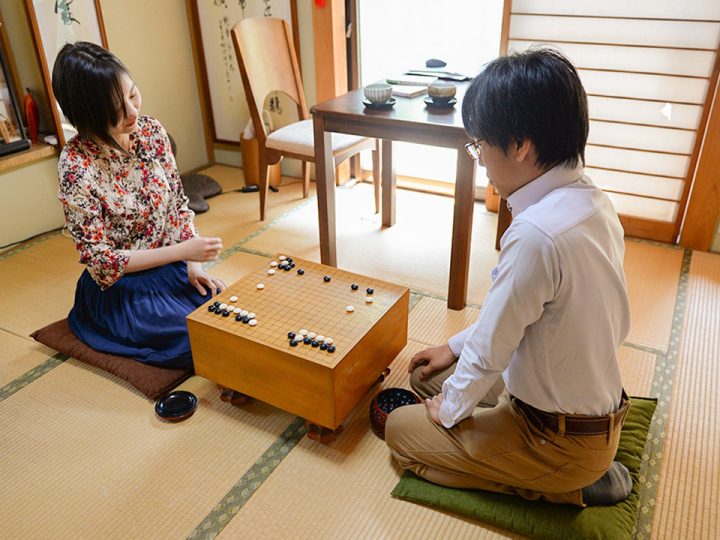 The History of Go
According to Nihon Ki-in (the National Go Organization of Japan), the game of Go (or “Igo” as it is called in Japanese) originated in China around 4,000 years ago, and was introduced to Japan some 1,400 years ago. The board game also appeared in The Tale of Genji, an 11th century classic work of Japanese literature. Go has also become popular abroad, in part influenced by the overseas edi-tions of the popular manga comic “Hikaru no Go”.

We interviewed Mr. Kanketsu Rin and his wife Mrs. Ayumi Suzuki, who are both professional Go players. Kanketsu is a student of Mr. Kaiho Rin, a legendary Taiwanese Go player who made his name in Japan and did much for the growth of the game.

Experience Suginami Tokyo: How did you first meet Go, and how did you meet each other?

Kanketsu Rin: I was born in Taiwan. When I was 5, my father took me to a Go class and that was my first time to come across the game. After that, due to my father's job there was a lot of going back-and-forth between Taiwan and Japan, and at age 14 I enrolled in Nihon Ki-in. At that time I was winning consistently, so I made the decision to go pro.

Ayumi Suzuki: I grew up in Asagaya. Similarly, I began to learn Go at the age of 5, influenced by my amateur/semi-pro 3-dan father, and I also joined Nihon Ki-in when I was 14 years old.
We got to know each other first as elementary school students. In our 20's we had more opportunities to talk and get to know each other, gradually opening our hearts and getting married in 2013.

EST: What do you enjoy about Go?

KR: The first thing I like is the large scale of the game. In Go you'll never reach the same circumstance twice. Just 10 moves in from the start you can enter an unknown world. In this way, every game you play feels fresh.
The second aspect I for me is that the constant maneuvering between victory and defeat is really enthralling. You have to able to read and judge movements and circumstances on the whole, and if every aspect of your game is not on point you can't progress. I can't really express in words the satisfaction of being able to win a game as a result of doing everything right.

AS: In a game of Go, there is not simply one best move. There are many ideas and takes on which move to choose in a given situation, and from these different decisions each player's personality shows. It's just like real life. This is why it is such an interesting and profound game.

EST: Please share with us your thoughts on the future of Go.

KR: According to government reports on leisure, the population of Go players in Japan peaked in 1981 at 12 million players, and decreased to 2 million players by 2016. At the same time, AI research has progressed, and computer versions of Go, such as AlphaGo, have entered the scene. It's a big deal because at the 2017 World Go Championship, 3rd place was achieved by the AI system DeepZenGo, defeating the 4th place 9-dan player, Yuta Iyama.

AS: We both have experience teaching Go at local elementary schools, and we once again recognized the power of Go through manners that come from the game and the way it cultivates both concentration ability and logical thinking. Even the children that didn't continue playing Go, they still retained certain qualities.

EST: As a family are there any places you’ve been enjoying in Suginami recently?

KR: Yes, the Zenpukujigawa Green Park along the Zenpukuji River. It has large open spaces for things like learning to ride a bike at the traffic park, tennis courts, baseball and soccer grounds, so that children and adults alike can enjoy it. In the spring it becomes a tunnel of cherry blossoms, and running along the river in that scenery is a moment of bliss for me. By all means go and relax there if you have a chance!

EST: Do you have any other messages for our readers?

KR: From October 2022 I will be a speaker on “Igo Focus” on the NHK network. If anyone is interested in starting to play Go, this may be a good opportunity. I hope you’ll join us.

A message from Kanketsu Rin in his native Chinese:

Suginami Go Classes
Around Asagaya and Ogikubo in Suginami, there are many Go classes aimed at young children and elementary school students such as Hon Dojo and Iwata Go Class. We hope to see some Go champions rise from Suginami in the future! 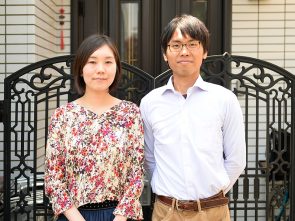 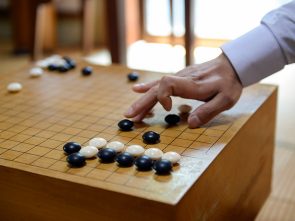 Kanketsu makes a move. He is particularly fond of how every game of Go is different and fresh.

Ayumi's move. She loves how players can show their personalities through Go. 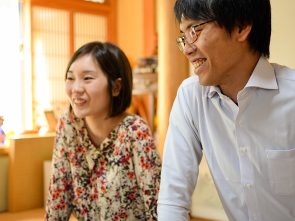 The game of Go brought the couple together and brought them a lot of happiness over the years. They are blessed with 2 children. Future Go champions?