“Edo Tezuma” is a traditional form of Japanese magic from the Edo Period, with very few practitioners in this day and age. We were very lucky to speak to a rare practitioner of Tezuma magic, who along with his master Shintaro Fujiyama, is a resident of Suginami, Tokyo. Taijyu Fujiyama has gone from Suginami to all around the world thanks to his magic, catching attention of people worldwide, even “Penn & Teller” in the U.S. We spoke to to Taijyu to find out more about his adventures in the world of Tezuma, and from Tezuma to the world. Our interview with Taijyu is translated into English here.
[published July 2019]

Experience Sugimani Tokyo: Thank you for taking the time for an interview despite your busy schedule. Many of our readers may not be familiar with "Tezuma" Japanese magic. Could you give a brief explanation about what makes it different from other magic?

Taijyu Fujiyama: “Tezuma” is magic conducted in Japanese style, where components of traditional dance and other classic arts are preserved in the performance. There are two important characteristics of this in Tezuma, those being “kata” and “mitate”. These concepts are common among many Japanese performing arts.

“Kata” are the poses that you can often see in Kabuki and such; established movements or routines. No matter how we move, if we strike a pose the movement becomes more refined, and furthermore we can express a character. These movements help to achieve these aims.

“Mitate” is the expression of using one thing to represent another. This is common in traditional Japanese dance, for example, such as when a sensu folding fan would be used to express various things like a flute or a sword.

EST: There are many Japanese magicians that we can see on (Japanese) TV, but Tezuma magicians seem to be very rare these days, even in Japan. What influenced you to start doing Tezuma?

TF: As a university student, I had the opportunity to watch a performance by my current master, Shintaro Fujiyama (a Suginami resident). I didn’t see him at any ordinary theater, but rather at a theater built in the Meiji era. At that show it was as if I had gone back in time to the Meiji era and was watching a show from that time with my own eyes.

I was deeply moved by that experience, became his pupil, and now I have become professional Tezuma performer.

EST: Is it common to take your master's last name as your performance name, or is it just a coincidence that you have the same name, "Fujiyama"?

TF: Since old times in Japan, it has been common practice to adopt the master’s name when becoming an apprentice. In this system the pupil studies the craft under supervision of the master. This practice is also found in other traditional arts, such as kabuki and traditional dance.

Once becoming an apprentice, it is possible not only to learn the master’s craft but also the style of the master’s specific school, and in order to acknowledge that and pay homage, the apprentice receives the surname of the school.

In my case that name is “Fujiyama”. So as a Tezuma magician, this name is a sign that I have completed my Tezuma training through the Fujiyama school.

EST: I heard the training to become a Tezuma magician is very difficult. What were some of those hardships, and how did they help you become better at Tezuma?

TF: To become a professional Tezuma practitioner, you cannot make it by just being able to do magic tricks. One must acquire knowledge of Japanese classical arts (Japanese traditional dance and instruments, etc.), and then and only then can Tezuma begin being performed. If a Tezuma student doesn’t have any of these skills, they must learn them all at once. Actually, I myself had to learn 3 of these traditional arts simultaneously, and then I finally began my Tezuma training.

For example, from traditional Japanese dance there is the dress style of the kimono as well as various gestures and movements used. With only one step in front of the audience, they can tell whether or not the performer has acquired the skills of these foundation traditional arts.

EST: We know you were born and raised in Asagaya. Do you still feel a connection to this area, and does it have any relationship to your magic?

TF: Fortunately my master’s office is the next station over, and I feel that was a big factor in becoming his pupil. Before becoming his pupil (during my college years) I assisted with his work, and even now thinking about it, to be able to see the work of a pro up close was truly a precious experience.

In addition, I also feel that Suginami is an area that really understands and nurtures the performing arts. There are many large scale events like the Asagaya Jazz Streets festival, Koenji Awa-Odori festival and Engei festival, and others that are creating an environment to advance performing arts.

EST: You have gone from Asagaya to all around the world. What are some of the most different countries you have performed in, and how did they receive your magic?

TF: In particular, my performance in South America comes to mind. I have often performed at Japanese festivals in Brazil and Mexico, and in spite of being Japanese, I couldn’t hide my astonishment that so many people were so fond of Japanese culture. They seemed to be more enthusiastic about Japanese culture than Japanese people themselves.

There I performed a one hour Tezuma show. In a theater with a seat capacity of about 600, it was so packed there were people without seats who were standing and watching. Their reaction was also tremendous, and I experienced what it was like to have unending applause.

EST: I assume you have gained a lot of recognition by winning awards at international magic competitions, such as FISM. What doors have those award-winning appearances opened for you?

TF: As a matter of fact I personally don’t really get a sense that anything has happened based on the results of those competitions. Apart from that, I get the impression that a current trend of interest in Japanese culture has had more influence.

However, I don’t mean to say that those international competitions were meaningless. My most important work, the “Shichi hengei” mask change, was a performance I created while aiming for those international competitions. In order to compete with the magic of the modern world it would be useless to just simply rely on performing traditional magic, so by adding an essence of “now”, I received a great response. Because I completed a performance in this way, I believe I have been able to match with modern times.

EST: I think many of our readers are familiar with "Penn & Teller Fool Us", the American TV show that you appeared on last year. Could you tell us a bit about your experience on the show and meeting Penn & Teller?

TF: When I was a high school student I went to Las Vegas and I got to see a Penn & Teller show. So, to be able to perform on a show they were both hosting 15 years later was an immense joy for me.
As a matter of fact, a unique characteristic of the show is that the performers scheduled to appear on the show aren’t permitted to interact with Penn & Teller at all before the show is filmed. I was so nervous at the time that I don’t really remember very well, but I feel that I performed successfully.

Actually, when the episode was broadcast it was very well received, so I think there is no mistaking that this appearance helped to make the names “Tezuma” and “Taijyu Fujiyama” more widely known.

EST: Gaining recognition abroad and spreading the word about Tezuma around the world, what are some of your goals and hopes for the future of your magic and Tezuma in general?

TF: “Tezuma” is still a word that even many Japanese do not know. In order to spread it further, better shows and many more performances will be necessary. I am often asked, “Where can I see your act?” In my case, I am often performing at business events or city and town anniversary events and such, which for the most part are closed to the general public. Because of that most people do not have a lot of opportunities to see Tezuma.

Going forward, it is necessary to increase live performance activity including independent shows, with even higher quality content via the performance and staff behind the scenes. I am hoping I can continue in such a manner.

EST: I appreciate your time. Thank you very much! We wish you all the best continuing down the road of Tezuma. 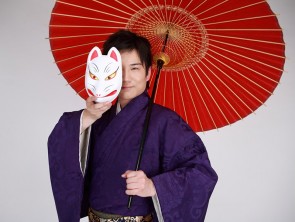 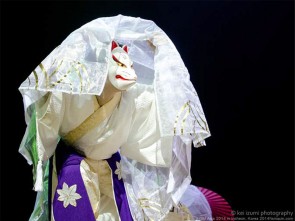 Taijyu in his 'kitsune' fox mask, part of his famous "Shichi hengei" performance 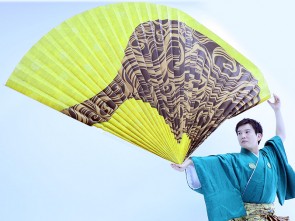 Taijyu and giant golden fan, one of the many traditional Japanese props used in his act 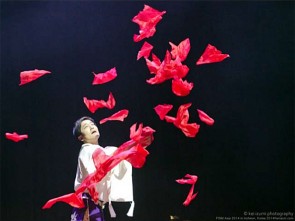