About Brian MacDuckston:
Brian came to Japan in 2007 with plans of spending a year abroad before returning to his home in San Francisco, USA. Sometime into his stay, he discovered ramen and started his “Ramen Adventures” blog, which kept him around. Since then, he has become one of the foremost English speaking authorities on the ramen scene in Japan, having visited over 1,400 shops around Japan. He has appeared on numerous television shows about ramen, written two books on the subject, and is one of the ramen critics for Ramen Walker, a popular Japanese ramen magazine. He currently resides in Tokyo, but frequently travels around Japan and the world to sample new and popular ramen shops.

Ogikubo and Ramen
I first discovered Ogikubo ramen when I first discovered ramen. Like many foreigners living in Japan do, I moved into a low-rent guesthouse, a kind of dorm-style apartment, just south of Ogikubo Station. The choice for such budget housing was made easy by the fact that I had no steady job, and my savings were dwindling every day. Enter the ramen. Affordable and delicious, I had a bowl at some forgotten shop in Ikebukuro that sparked my interest, and immediately set out to try the best shops in town. Back in 2008, the internet was devoid of much English information about ramen, but I happened to find some mentions of its history in Tokyo; Ogikubo is the home of Tokyo ramen.
-Brian, Feb. 2020 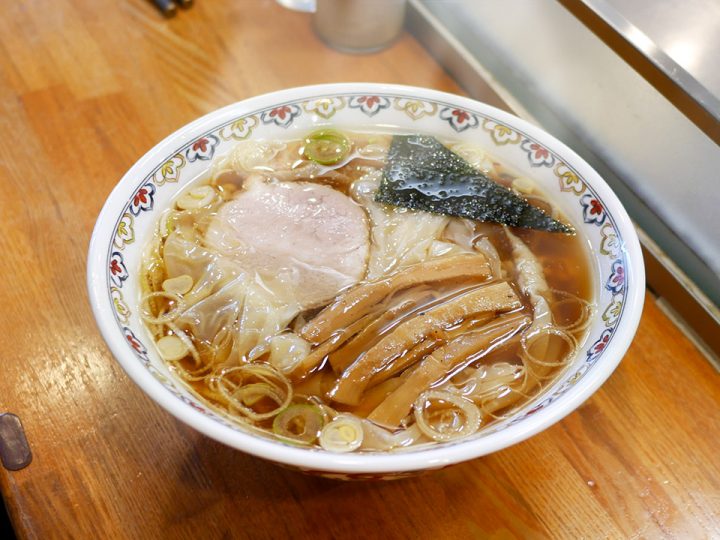 Though there are many ramen shops from the first half of the last century, it was Harukiya (荻窪中華そば 春木屋 荻窪本店), founded in 1949, that set the standard. This style is characterized by a thin, mostly chicken bone soup flavored with soy sauce. It’s oily and often served with wontons. The original recipe was apparently a bit lighter, as ramen in the 50’s was made with ingredients that were both of lesser quality and quantity than what we see today. In the present, Harukiya’s soup is rich and full of umami. This is comfort food at its finest.

It should be noted that there is an older Harukiya, founded in 1931, a few blocks away. This one is more of a shokudo, serving soba, rice bowls, and tempura alongside the ramen. The story is that the more popular Harukiya, near the station, was an offshoot from them opened by a relative, but that changed hands enough times to be considered a completely different shop. 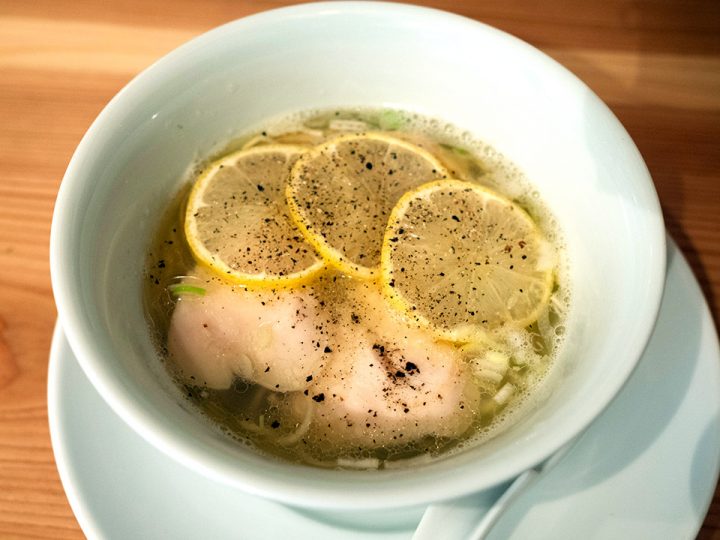 Just west of Harukiya is Ogikubo’s famous Kyokai-dori Road, a narrow shopping street full of quaint shops and restaurants. For a ramen hunter, there are a few notable ramen shops here, all very different. Neiroya (ねいろ屋) matches their ramen with something unexpected, Japanese shaved ice. Called kakigori, Japanese shaved ice is a seasonal delight. The menu changes day to day based on seasonal fruits: strawberry in winter, citrus in summer, and persimmon in autumn. The ramen here is a lighter style, using ingredients like dried fish from the Seto Inland Sea and citrus. The salt-based shio ramen is very popular, but the shop also has a rotating menu of limited bowls that keep customers coming back. For those who only want the shaved ice, it is important to note that during the lunch rush you need to order ramen first if you want to have kakigori, something both ramen and kakigori fans have no problem doing. 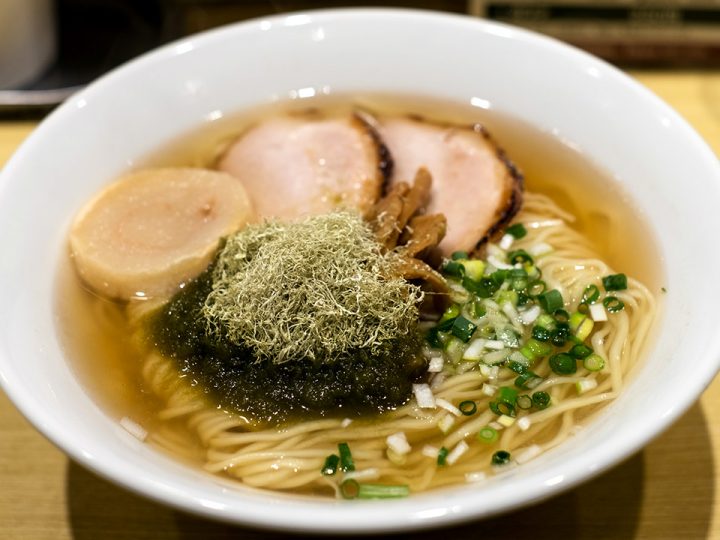 Another light style of ramen on Star Road is Goryokaku (函館塩ラーメン五稜郭). This shop’s ramen is Hakodate-style from Hokkaido, an island in the north of Japan. Most people think of miso ramen when they think of Hokkaido, but Hakodate is all about the salt. Clear broth seasoned with salt and umami-rich dried seafood is a better match for the more temperate climate of Hakodate. Goryokaku offers something unique as a topping, Gagome kombu seaweed. Gagome is a rigid looking piece of kelp that is harvested in the Hakodate area. It melts into the soup, giving it a viscous texture and a big boost in umami. 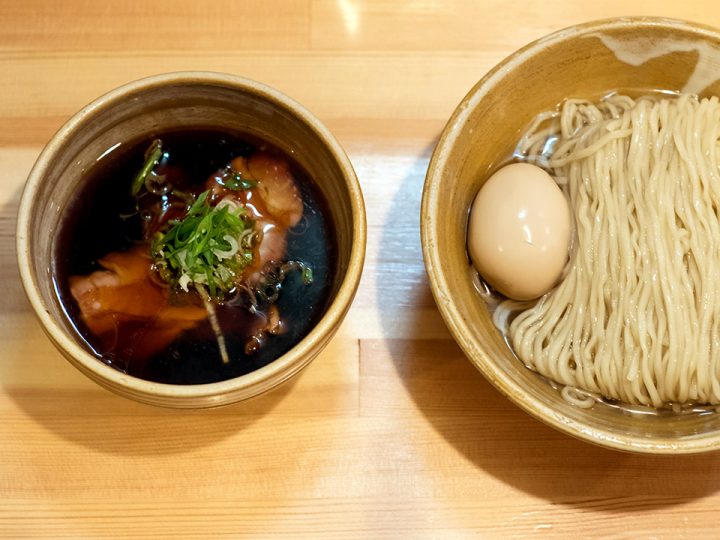 ***UPDATE: Note that Uchoku left their Ogikubo location in January 2022, for reference only***
Farther west of Kyokai-dori Road, in a residential neighborhood, is Ogikubo’s latest hit ramen shop, Uchoku (迂直). Though they serve ramen, the bowl to order is their tsukemen (dipping noodles). The homemade noodles are served in a bowl of kombu-sui, a thick liquid made by rendering down kombu kelp. It is thick, viscous, and full of umami. The dipping soup is flavored heavily with soy sauce. When you finish the noodles, pour the kombu-sui into the soup, and drink it down. Keep in mind that the line you see in front of the shop probably continues a block away; Uchoku is located in a residential neighborhood not fit for massive ramen shop lines.

Venturing even farther west, along the main drag Ome Kaido, you’ll find Hook (味噌っ子ふっく). Hook’s miso ramen is an evolution of Kaede’s miso ramen, which is an evolution of Hanamichi’s miso ramen. All of these miso ramen spots were lauded by ramen critics throughout the years for taking Sapporo-style miso ramen and tweaking it just enough to be considered a Tokyo thing. Chicken and pork bones are used in a 60/40 combination and combined with miso from both the Shinshu and Sendai regions of Japan. Go with either the standard bowl or kick it up with the spicy one. 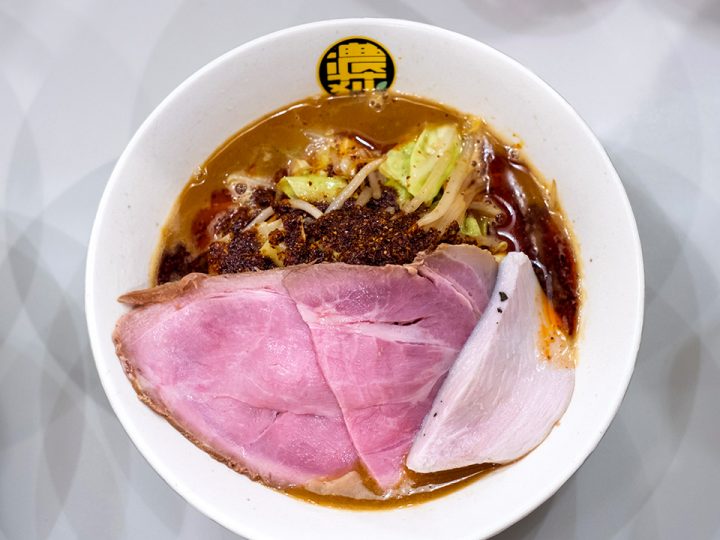 Back near the station, the fourth branch of popular Inosho (濃菜麺 井の庄 荻窪店) opened back in 2018. Inosho’s ramen is thick and fishy, living up to their tagline “Extremely thick soup ramen with sticking to vegetables and meat.” For spice fans, the karakara ramen looks much stronger than it is, but still packs a fiery punch. In an unusual move among ramen shops, Inosho piles on fresh vegetables for some crisp freshness you usually won’t find atop your noodles. 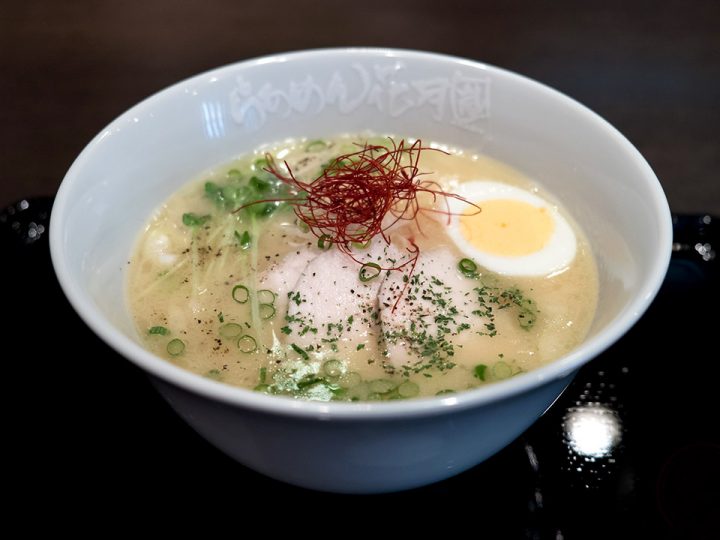 Although it is a nationwide chain with many shops around the country, Kagetsu Arashi (らあめん花月嵐) is a favorite for many reasons. Their most popular bowl is the Arashi Genkotsu Ramen, thick pork ramen made with their secret soy sauce blend. Their major draw, though, is the rotating monthly limited menu. Each month’s limited bowl is produced alongside another famous ramen shop or personality in the ramen world. These range from refined bowls done in collaboration with Michelin starred chefs to ultra-garlicky soups from pro wrestlers to creamy chicken ramen from American noodle critics.

The areas surrounding Ogikubo have many ramen shops worth exploring as well. In Minami-Asagaya, Isshou (麺処一笑) is one to check out. The base bowl is a thick tonkotsu (pork bone soup) ramen with medium noodles. What really sets Isshou apart are their flavor options. Alongside the ramen, you get a bowl of meat, veggies, and sauce. Each one is completely different. The “sour” style is full of cilantro and lemongrass. It’s meant to be Thai flavored. Stamina style comes with extra garlic and a helping of pork back fat. Numbing style is served with spicy vegetables, Sechuan peppercorn, and garlic chives. A total of eight different flavors make this a place for anyone. 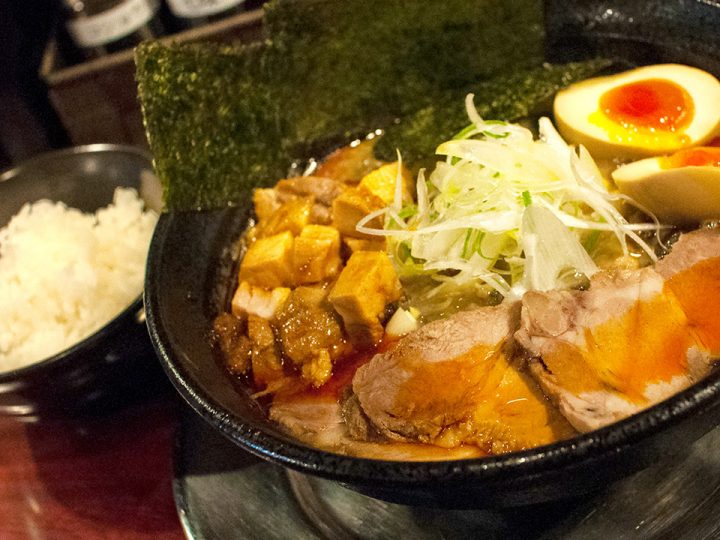 Jagura (じゃぐら) in Koenji serves up one of the most intense tonkotsu bowls in Tokyo. Pork bones are slowly rendered down into a thick soup. Four kinds of miso and fifteen other secret ingredients go into the seasoning for Jaruga’s bowl. The shop recommends that when you finish your ramen, dump a bowl of rice into the remaining soup, add a dash of their homemade curry powder, and enjoy a completely different flavor.

Open since 2015, RAGE in Nishi-Ogikubo is considered by many to be a contender for the best ramen in Tokyo. The shop uses prized shamo, Tokyo-raised game fowl, for their soup and toppings. These chickens are meatier than other breeds and the result is a uniquely chickeny bowl. The chicken chashu on top is cooked sous-vide, and still practically pink in color. The shop feels like it could be a skate shop, with Supreme stickers and street art adorning the walls. The mazesoba shouldn’t be missed; it’s topped with a cured egg yolk that is practically red in color.