Experience Suginami Tokyo (abbreviated as "EST" hereafter): Thank you meeting with us during this difficult time. Could you please introduce yourselves and tell us about the relations between the two of you?

Manabu Otsuka (abbreviated as "MO" hereafter): I am Manabu Otsuka, Managing director of both MAPPA and Contrail.

SK: Together we have produced two animated movies at MAPPA. I am very grateful to Otsuka-san, who worked hard as a producer.

MO: Katabuchi-san says he owes me a lot, but I always learn from him by watching his work every day.

EST: Suginami Ward is well known as a mecca of animation companies. Please tell us in what circumstances your company came to be based in Suginami.

MO: The present CEO, Mr. Masao Maruyama, cofounded an animation studio in Suginami named Madhouse in Suginami. He wanted to go back to a beginner's spirit, so he newly founded MAPPA in Asagaya in 2011.

MO: The site where the old office used to be has a large apartment building now.

SK: It is right next to the present studio. That's where I used to work. Mr. Maruyama once mentioned one of the reasons why he had his studio in Suginami was that there are good restaurants in Asagaya. Asagaya is still now a "delicious town" for us.

MO: The studio is close to the station, and both JR trains and Tokyo Metro subway lines are available. I'm sure my staff finds it very convenient. As Director Katabuchi said, one of the features of Asagaya is that there are good restaurants here. We all enjoy that fact, too.

EST: Do your studios have any kind of relations with the Suginami Animation Museum?

SK: Of course. I have known Mr. Shinichi Suzuki, director of the museum, for a long time. "In This Corner of the World" was completed in 2016, but we had started making the movie in 2010. While we were preparing for the movie, we tried to let as many people as possible know that we were creating a film like this. So even without anything completed we had posters for the film exhibited in the museum.

MO: We also had MAPPA film exhibitions and had some events held there, including an exhibition of our animation that was broadcast on TV.

SK: We hope the museum will continue exhibiting our works and we are pleased to have a good relation with them.

MO: I do hope people in Suginami will take notice of our work.

SK: Right, I'd like local people to know that films like these are being made here in Suginami.

EST: We are interested to hear your thoughts about the differences between Japanese anime and foreign anime. It seems that Japanese anime are still mainly drawn by hand, where abroad they are mostly going the route of CG these days. What is it about that hand-drawn style that is so Japanese?

MO: I think it has to do with the influence from directors Hayao Miyazaki, Isao Takahata, and Katabuchi-san as well, who have been leading the style Japanese anime. They and others have developed the present style of Japanese animation, which others in the field continue to follow.

SK: I think our works start from the joy we get from making drawings come to life. I’ve worked on a lot of animation, and always try to draw by hand as much as possible. I think that is because that way you can feel a direct contact with the art. These days anime works made by CG with a hand-drawn appearance are increasing, but in our work we continue to keep pencils and erasers as the primary tools. I had the honor to speak to the famous Japanese director Mamoru Oshii when he saw “In This Corner of World.” Of course Director Oshii is well known for his many animated films (Ghost in the Shell, etc.), but he also works using CG as well. What’s good about hand-drawn animation, he said, is that on the other hand CG animation reflects the current techniques and standards of technology when it was made. At that moment, it was the most impressive technology, but after a few years much more amazing technology will exist and those CG techniques already look dated; they don’t stand the test of time. However, those works drawn by hand, they are always the best they can be because the human hand cannot be further updated. So that which you put in your best efforts to draw by hand at that time, will always be recognized as such. This I very much agree with.

MO: We have to make a lot of anime as there are now many TV series, so we need to use CGI/computers to complete certain things faster. However, viewers don't care whether it is made by CGI or by drawn by hand. So when CGI is used, our policy is that the viewer shouldn’t notice as it should fit with the hand drawing.

SK: In our works, there are some parts made by CG, but as Otsuka-san said, but they must be mixed in such a way that the viewers will not notice it. We have to make sure viewers see it all as one style.

MO: By whichever the work may be made, we must educate our animators to be able to make works that can meet the expectations of Director Katabuchi.

EST: In terms of hiring and training new animators, do you intend to create your anime with only Japanese animators or do you welcome animators who come from abroad?

SK: In 2019 in France, we held a workshop for young animators. When I told them that we had a plan of producing more work like this, one person said he wanted to join the production of such films. I hoped he could come to Japan to work to with us, but after that he couldn’t come to Japan due to the COVID-19 pandemic. When this pandemic calms down, I hope people like him will come to Japan. There are certain things that only Japanese animators can express, but at the same time there are things that non-Japanese animators can express. If both Japanese and overseas animators can cooperate, the work will be richer. So, I sincerely hope the work of animation will be open for animators from overseas.

MO: I think MAPPA is pretty much a multinational company.

SK: The guy who had said that he wanted to work in Japan told us that a friend of his is already working in Japan.

MO: As a matter of fact, animators from various countries are actively working at MAPPA. The important thing is that MAPPA be a company where people hoping to make anime in Japan can get together. For instance, "Jujutsu Kaisen”, which is now being broadcast, is made by a Korean director.

SK: Since Japanese anime and anime from abroad have different styles, I think it's good for people with interest in those styles to go abroad to participate in overseas works. Japanese artists are participating in French animation, and on the other hand I think it would be great if people who want to work in Japanese animation will come to Japan. Currently I teach online at the graduate course of Tokyo University of Arts, and around half of the students are Chinese.
If you go to a film festival, you may soon realize that nationalities have nothing to do with anime. Our work is not only for Japan but for all over the world. Mr. Masao Maruyama once taught at a university in Kazakhstan. He visited a rental video shop there and was surprised to see all the shelves of the shop were filled with Japanese anime. I suppose it's the same the world over. You can understand how popular Japanese anime are when you think he was invited to teach anime by a country far away from Japan. So, there really are no borders in the world of animation.

MO: Watching anime online is getting more and more popular around the world. And so, when we make our anime, we must not forget that our market is the whole world.

SK: Had it not been for COVID-19 pandemic, we could have gone abroad at least 5 times this past year. Instead, we gave online lectures for animators in Hong Kong or France right from this room. We have had many more opportunities like this. We feel as if this room were the doors to the world. 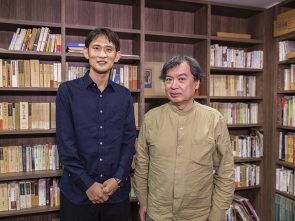 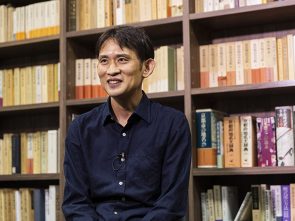 Sunao Katabuchi, Director of "In This Corner of the World" etc., Director at Contrail 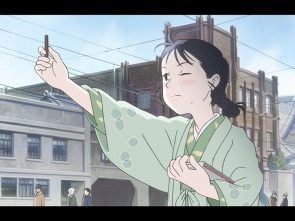