Game Studio Cube is a long-standing arcade in Koenji that was founded in the late 80’s and was one of the many bustling arcades in the area by the arcade boom of the 90’s. We interviewed Cube’s current manager, Goto, as well as some players involved in the weekly Street Fighter III 3rd Strike and Vampire Savior (Darkstalkers 3) fighting game communities, who live in Koenji.

Roshihikari and Fern are Street Fighter III 3rd Strike players. Roshihikari is known for his Yang, and Fern is a Dudley player who moved to Japan from the US.

Experience Suginami Tokyo (EST): When did you first go to Koenji Cube and what was it like when you first went there?

Goto: I started going to Cube around 1995. At the time there were many SNK Neo-Geo machines (with the 4 selectable games), and people were crowding around King of Fighters ’95. Virtua Fighter 2, which came out the previous year was also popular, and a Cube staff member was very strong in the game which got a lot of attention.

Chikyuu: Back when I was an elementary school student, about 30 years ago, I was going to school in Koenji, and Cube was the arcade in front of Koenji Station. When I was in 5th grade or 6th grade, I first went there to play Street Fighter II.

Goto: After Capcom’s Street Fighter II came out (1991), fighting games were in such high demand and brought such efficient income that games in the genre were released one after another, and arcades gradually had a larger ratio of fighting games. I remember there were about 10 arcades in Koenji alone in the 1990’s (for reference, Koenji is just one station area in all of Tokyo, back at a time when there was practically an arcade at every station). It was a time when not just in Koenji, but when arcades were thriving throughout the country.

EST: How have you noticed that the arcade has changed over the years?

Goto: When I started going, there was a small counter where the current Chunithm game is. There was also a rest space with a large round table. Also different from the current arcade were the fortune-teller machine (with a reputation that its fortunes would come true), UFO Catcher, or the cork rifle shooting game with large prizes on display that you could win. After that time, the counter got bigger and was moved to the middle of the arcade, and the prize games were replaced with music and rhythm games such as Beatmania and Dance Dance Revolution (in the late 90’s).

After that Cube was largely renovated in 2006. New arcade staff were hired, many games were replaced and the layout was largely changed. At this time the counter became small again (laughs). The layout of that time has essentially remained as Cube is today. Staff who came at that time loved fighting games and they played in the Tougeki tournament (Super Battle Opera, run by Arcadia magazine) and were involved in and excited about fighting games at Cube. After the renewal, Tekken 5 and Street Fighter IV were popular games. Cube also became known as a rhythm game arcade due to its location with quick access to Koenji Station, large amount of games, and consistent maintenance.

EST: When and how did the Wednesday fighting game gatherings start at Cube?

Goto: Years ago there was a request to start the Vampire Savior gatherings there, and Cube staff supported it at the time by opting to switch out the Street Fighter III 3rd Strike game board with Vampire Savior on certain days, which became the 2nd and 4th Wednesday of each month. We tried that out and those casual match nights had a favorable reputation, so they continue to this day along with the 3rd Strike casual match nights.

Chikyuu: The Vampire Savior community at Cube started playing there maybe 6 or 7 years ago, probably around 2014. The home version “Vampire Resurrection (Darkstalkers Resurrection)” came out around that time so a lot of players who played way back when were reinvigorated, and wanted to play again. So we thought we could get people together at Koenji Cube.

EST: Even though these games are over 20 years old, it seems there are some young people playing both 3rd Strike and Vampire Savior, and some of them are quite good. How did that happen?

Chikyuu: Right, Vampire Savior came out in 1997, and some of these players weren’t even born then.

Fern: Yeah, the game is older than them. They get a lot of help from a lot of the really good 3rd Strike players. They have that advantage. The community really helped them out. They are at a level I’ve never seen before, and they got to it extremely fast, within a year or less than a year. They’re playing at a very competitive level, beating some of the veterans that you’d think they should be playing a long time to beat, but I think it’s because they go there a lot. They get the tips and the help from the veteran community and they’ve leveled up extremely fast.

Dara: That’s true. For young players who have just started playing and haven’t tasted the excitement of traveling around to battle with strong players, I’ll assertively suggest visiting certain places, really talking them up, and sometimes they’ll go and enjoy the games and respective communities. So hopefully that aspect is getting passed down to the young players, because it was so fun for me.

EST: As you all live in Koenji, I want to make sure I ask you about your opinions of Koenji, too.

Chikyuu: Koenji Cube is a place where after playing people will go out to eat and drink, and Koenji has a lot of izakaya and places like that. So it’s easy to get together to play Vampire Savior and go out to eat after, before going home. This way Cube has become a sort of community space. Unfortunately we can’t do stuff like that during the pandemic, though.

Fern: Koenji has a lot more stuff besides the arcade— it’s an interesting place to be at night time as there are a lot of colorful and entertaining people on the outside, so my friends and I would come and hang out at the dual parks.

Dara: When I moved to Tokyo, at first I lived in a company dormitory, but when I was ready to find my own place, I was really unsure of where to live, and was looking all around Tokyo. In the end the reason I chose Koenji was because of the vibe here, and I got a lot of recommendations from friends all telling me, “Koenji is a good place.” So I came and checked it out and thought it would be a good place to live. So I chose Koenji. It’s also close to the city center of Tokyo so it’s really easy to get around, there’s a ton of good places to eat at, and people are walking around really looking like they’re having a good time. There’s no dark mood here at all.

Fern: I always liked Shinjuku area and I wanted to live in the area, but my friend lived here and said, "You should just move to Koenji because you’re going to be there all the time anyways (for Cube)." So I thought that made a lot of sense, then I wouldn’t have to worry about the train. So I started looking for a place. I wanted to be close to Cube, so that’s why I moved to Koenji. So I don’t have to worry about last train or anything like that.

Dara: Basically I live here because Cube is here. I thought that I’d live in a place where I could go to the Vampire Savior match gatherings at Cube as much as possible. It’s a comfortable place, and all the members are fun people.

Fern: It was a combination of Koenji itself and Cube. Cube was 60% of the factor, but other than that Koenji is a cool place. It has a mixture of the old and the new, and you’re close to Shinjuku, and that’s where I wanted to be. I’m 6 minutes away with the rapid to get to Shinjuku, so it was a no-brainer for me, and it’s not as expensive as Shinjuku.

EST: Lastly, do you have any messages or advice to people who would like to start playing these games or join the community, even just visiting on a trip, at Game Studio Cube in Koenji?

Roshihikari: Sure, before Corona there was the Cooperation Cup (the biggest annual SFIII 3rd Strike tournament in Tokyo) so for that event there were many people coming from abroad to warm up at Cube. Right now it’s difficult, but at that time some 3rd Strike players knew my name, and wanted to shake hands and such. That’s extremely welcome. I’m hoping to meet more players when things come back. So when Corona settles down, it would be great if people could come again. If they come to Cube, many people can speak English, including some Japanese. So I think because there’s less of a language barrier people can have more fun. And everyone here is very welcoming. It should be fine, so please come.

Fern: Once Japan opens up I know there a lot of people who want to come to Cube. Araki streams online and he has a community there. I’m pretty sure there are people who watch it every time, and can’t wait to get there because for one, they love 3rd Strike, and 2, Araki is the one who’s always there. And if he’s there, he’s going to say, “Let’s play.” He’s not going to turn anybody away, foreign or Japanese.
There are 2 cabs. I really can’t think of anyone that’s going to be stand-offish, and for the most part, I think Cube is maybe looked at as the “gaijin arcade” for 3rd Strike so they’re going to be a bit more accepting because there’s always one foreigner there (me!). One or two, sometimes five. So they’re going to be welcoming. But it’s not for the faint of heart, either, as 3rd Strike has a huge learning curve. You’re definitely going to be throwing a lot of 100-yen coins down pretty fast.

Dara: Absolutely, please come and throw down! We will absolutely eliminate you! (laughs) There are a lot of strong players in Japan. We will make sure you don’t regret coming, though. If you come to Japan, you definitely won’t be disappointed.
The matches will definitely be fun, and you’ll be bitter from your losses but want to come back to get revenge, I think. (laughs)

Also, please check out my YouTube channel as I put up a lot of content for Vampire Savior fans. Soon the “Capcom Fighting Collection” is coming out (June 2022) which includes all 5 of the Darkstalkers games with online fighting, so I’ll put up a lot of new videos. I’d like people from all over to watch them. I’m making the content for people all around the world, so please watch!

Chikyuu: Well, we should let everyone know how great the community aspect of arcades is, and the love we have for this world of ours. So each one of us can do our part to think in the necessary way to take care of arcades. I hope if we all continue to cherish them they won’t go away. 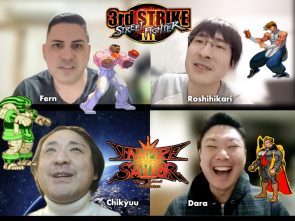 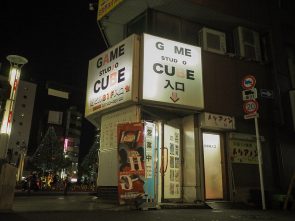 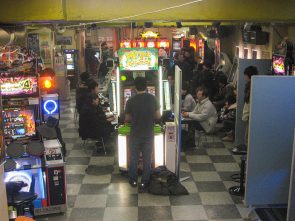 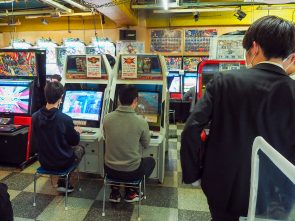 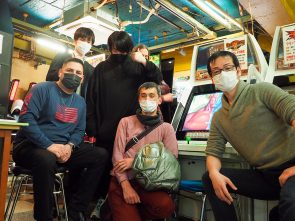