The Asagaya Tanabata Matsuri, or “Star Festival”, is one of the major Suginami summer features. It has been held in the Pearl Center Shopping Street near Asagaya station at the beginning of every August since 1954.

About 1 kilometer long, the covered arcade shopping street is filled with lots of inventive hanging decorations, which are all hand-made mainly using papier-mâché. They are cute, funny, colorful and unique, and you could visit many times during the 5-day period and still not get tired of looking at them. Animated characters are very popular and many people take photos to capture them, since every year has different decorations!

During the festival, many food and drink street vendors line the streets. You can enjoy shopping and Japanese old fashioned festival activities, such as goldfish scooping and more.

The Asagaya Tanabata Festival is usually held from 5 days in early August, including the first weekend.

The Making of Papier-Mâché Decorations
You may wonder, who makes these giant papier-mâché decorations, where and how?
By tradition they are all handmade, so the staff members of each shop in the Pearl Center make them, usually outside the shop in the shopping street late after store hours. However, some staff make them in parking spaces behind their shops, some in the alley, and others work on them at home.
After the covered shopping arcade as seen today was built, they found an easier way to work on them by hanging the work during business time above the street and lowering it back down in front of the shop after closing time. Before the roof was built over the street, they had a hard time finding a place to make and store the projects. Now if you go to the Pearl Center in the week or two before the festival you will be able to see these marvelous works in progress– that is, if you look up at the ceiling of the shopping arcade.

Traditions Passed Down
At the beginning of Tanabata Festival in Asagaya, no one knew how to make the papier-mâché decorations, so some visited the other districts to learn the techniques, and also invited the leaders of the craft from those areas.

The techniques of making the papier-mâché decorations has since changed. For example, the framework changed from bamboo to metal wire. However, the method has been shared and passed down from generation to generation by the guidance of elders and groups with proven methods.

Even though the technique has changed, the cooperative attitude of the people in the shopping street has continued for over 6 decades. 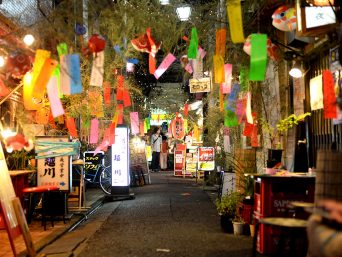 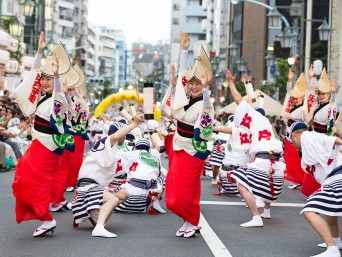 Held the Last Weekend of August