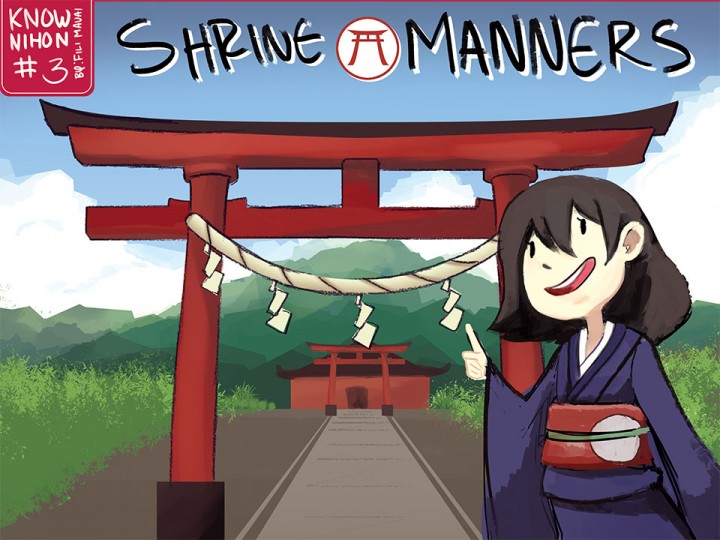 To Pray or Not to Pray

All visitors to Japan may feel free to visit Shinto Shrines as sightseeing spots, and you don’t have to pray if you are not comfortable with it. However, you should always respect the shrines as a place of worship, and if you / your religion are OK with it, you are certainly welcome to follow the Japanese customs of prayer and other traditions as guided here. 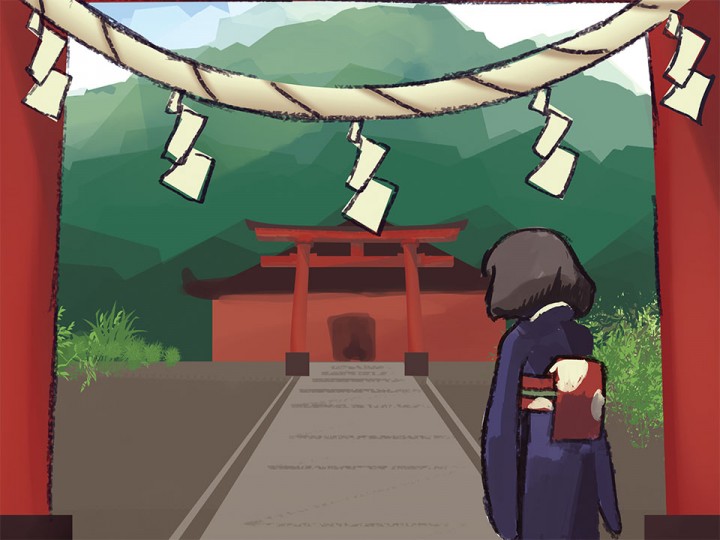 Always respect the shrine's buildings and grounds– not only for religious reasons but also because they are usually hundreds of years old, or even thousands! Many Japanese bow when entering (and leaving) at the torii gate, then proceed walking the path to the shrine on either side, as the center of the shrine path is considered to be where God walks. 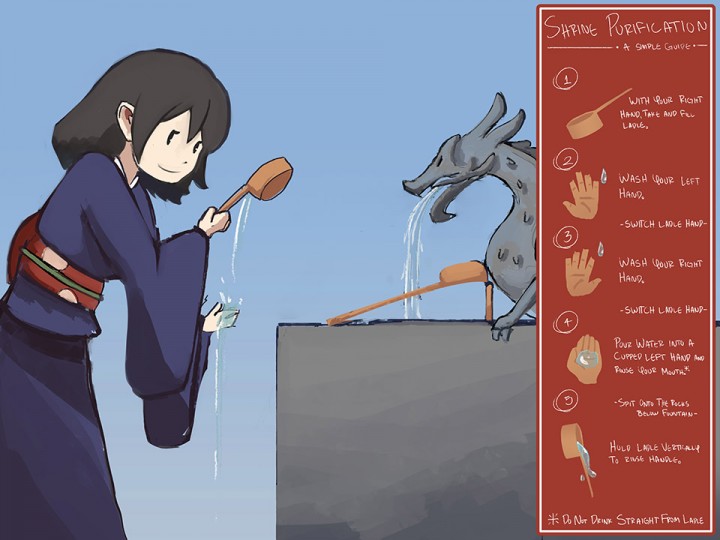 How to Wash Your Hands:

After entering the grounds, the first thing to do is purify yourself before prayer at the water trough:

1. Wash your left hand with water from the ladle held in your right hand.

2. Switch hands and wash the other hand.

3. Switch hands again and pour water into your clean hand to sip, rinse out your mouth, and spit in the drain below the trough.

4. Rinse the ladle by holding it vertically so the water runs down the handle, and return it to its perch above the water trough. 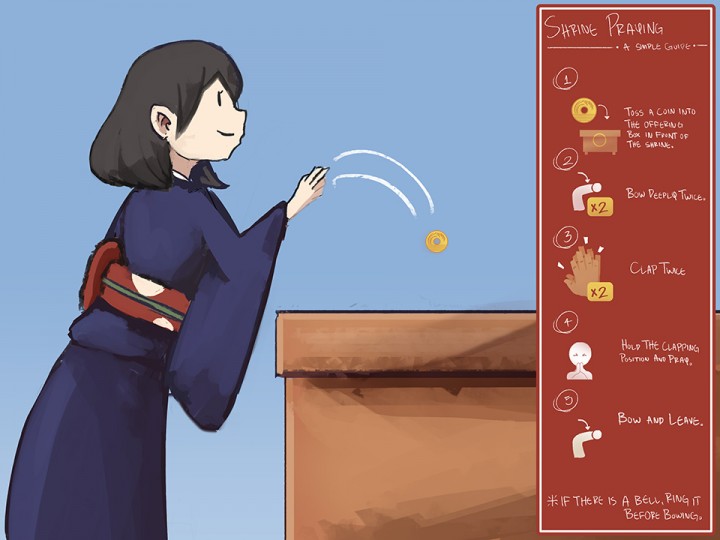 After you go up the stairs to the main shrine, these are the steps to pray:

1. Make an offering of any amount of coin, however the 5 yen coin is best for good luck called “goen”, and the 10 yen coin is not recommended because it could mean luck is far (“to-en”). It's best to use a clean and shiny coin.

2. Use the rope to ring the chimes to wake the God.

5. Pray or make your wish, silently with hands clasped.

6. Bow once more before leaving. 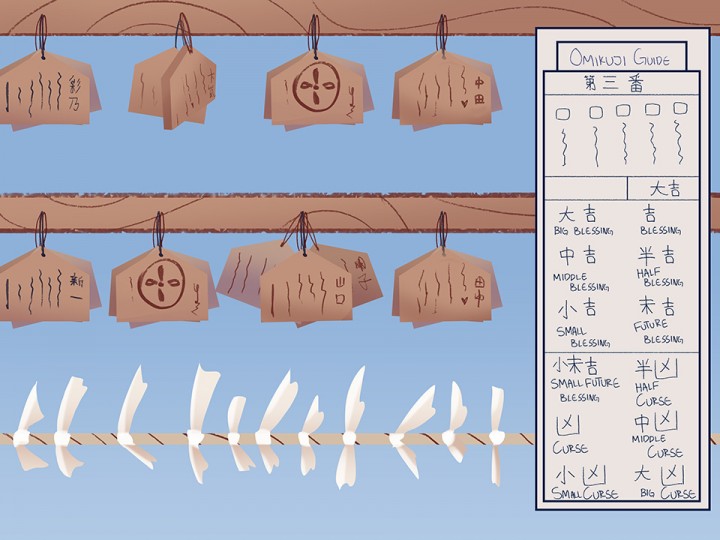 Lastly, paper fortunes called “Omikuji” can be a fun way to enjoy shrines (usually written in Japanese only, usually 100 yen), but be aware that you always have a chance of getting a bad fortune as well! When you get a bad fortune (please refer to the kanji explanation in the manga), you should tie your bad fortune (curse) to a tree branch or structure provided to try to ward off the bad luck. The wooden votive tablets called “ema” are also available to write a wish or message on, and then hang in the provided area at the shrine.

Although most Japanese people these days are not very religious, most follow these customs when entering shrines, and it is respectful for you to do the same. Additionally, it will be a part of your Japan experience!

One thing you should take note of is that in Japan there are both Buddhist Temples and Shinto Shrines. The guide here is only for Shinto Shrines. Temples, on the other hand, often similarly have an offering box but you only need to pray silently after making your offering. So, how do you tell the difference between between shrines and temples? Here are a few key ways:

SHRINES
* Large torii gate at entrance to compound, usually red, sometimes stone.
* Shrine buildings are usually more elaborate on the outside and sometimes colorful (reds and gold etc.), decorated with large ropes and hanging pieces of zig-zag shaped white paper (see manga frame 1).
* Shrines sometimes have guardian statues of lion-dogs, depending on the type of shrine these figures change– for example Inari Shrines have fox figures.
* Shrines are pronounced “jinja” in Japanese, with these characters: 神社 ; Likewise, many shrine names end with “jinja”, such as Koenji Hikawa Jinja in Koenji, Tokyo. Another common ending is the character 宮 “gu”, such as with Shinmeigu in Asagaya, Tokyo. “Hachiman” and “Inari” are common types of Shinto Shrines.

TEMPLES
* Often there is a very large gate structure that has a roof and houses statues of “raijin” gods or other figures on both sides.
* Temples are usually more plain wooden structures on the outside, with elaborate golden Buddha statues or other Buddhist imagery inside.
* Pagodas (often 5 story or stone pagodas) and/or large cast-iron bells are often found in temple compounds– the large bells are used for “Joya No Kane”, to cast away 108 earthly desires on New Year’s Eve.
* Temples are called “o-tera” in Japanese, written with this character: 寺 ; the character can also be pronounced “ji” so most temple names names end with “dera” or “ji”, like Kiyomizudera in Kyoto or Chudoji in Ogikubo, Tokyo. The character 院 “in” is another common ending, like Komyoin in Ogikubo.