Tate (pronounced “tah-tay”) is the expression of a sword fight usually for the stage or the screen. Daigo Ishimatsu is a tate instructor and a sword fight scene choreographer based in Ogikubo, Suginami, Tokyo. He choreographs sword fights for the stage and screen, as well as events.
He also runs a Tate class in Ogikubo, teaching both actors and ordinary people who want to learn Japanese sword play.
(Workshop information available here on Experience Suginami Tokyo)

Experience Suginami Tokyo: How long have you been a Tate Sensei, and what was your introduction to this unique sword art?

Daigo Ishimatsu: In 1979 I was aiming to be an action star and I entered the world of show business. When I was 16 years old I entered a training school and met a Tate sword master. It was at that time that I genuinely began learning Tate. The first time I choreographed a sword fight scene was while I was working as an actor at age 17. Ten years later when I was 27 was when I became a full-fledged Tate instructor/ sword fight scene choreographer, and I am now in my 27th year pursuing it.

EST: I enjoyed my tate trial lesson with you. After practicing kendo and karate, I found some similarities and many differences to be very interesting. You were aware of many differences also. Have you practiced other martial arts? If so, of all martial arts, what made you devote yourself to Tate so much to want to teach others?

DI: I have trained in judo, karate, and aikido but for some reason I have never done kendo. However, I have studied kendo a bit. In the end tate is for a performance, so it does not really correspond to the nature of an actual martial art. Although Tate is deeply rooted in the art of kendo/Japanese swordsmanship, in the end it is choreographed swordplay that only has the appearance of such an art. Unlike martial arts, Tate aims to make something that is not real look real. How to achieve this in itself is an art, and that is what I have devoted myself to.

EST: Unlike karate, judo, or even kendo, the term "tate" and the art itself is little known abroad, if at all. Could you briefly tell our readers what makes it different and unique from these arts?

DI: Tate began from sword fight expression, not traditional martial arts. It was given the name "tate" but the Chinese characters were "Satsujin", the word for "murder". Later on the characters were changed to their current reading (which still can be pronounced "Satsujin"). And so Tate is different from martial arts because it is rooted in theater, not a self defense discipline, although in order to create a good performance we must make it look like real martial arts.

EST: I heard that Tate is a sword art that is used often for Japanese samurai films. Was it developed specifically for this purpose, or does it have a longer history?

DI: Well, it does have a longer history in that it actually began before movies were invented, with traditional Japanese kabuki theater in the Edo Period (1603-1868). However, it was developed for theatrical purposes. Tate is actually not only sword battles, but it can also be the choreography of fights without weapons. Tate can be the expression of a fist fight, a battle between sword masters, or even a simple quarrel between common people.

EST: Have you been in any movies or on TV, or have any of your students appeared anywhere that you can tell us?

DI: I have been in both historical samurai dramas on television, movies, and a great number of theater performances. The TV dramas I was in include “Akatsuki Rannosuke”, “Shingo Torimonocho”, “Yagyu Bugecho”, and “Sengoku no On’na-tachi”, among others. I was in the movie “Maki Tensho” with the English title “Samurai Reincarnation”.
(*Translator’s note: The TV dramas don’t seem to have been released abroad, so they are listed in their Japanese title with romaji spelling.)

EST: Are there any movies or TV shows that you think have outstanding Tate choreography, that you could recommend our readers check out? Do you have any favorites that inspired you?

EST: Your Tate class is based in Ogikubo, Suginami. Did you choose this location for any specific purpose, or is it just convenient to where you live?

DI: Yes, actually it is simply located close to where I live.

EST: Well, it’s a good location, and I hope some of our readers will go check out your class. I think many will also enjoy the video we shot at Ogikubo Hachiman Shrine, also in Ogikubo. Thank you for your time! 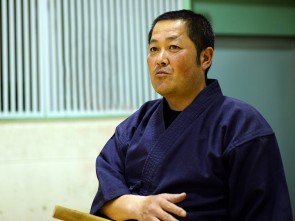 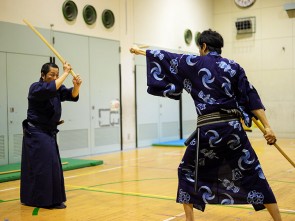 Training with a student in Ogikubo 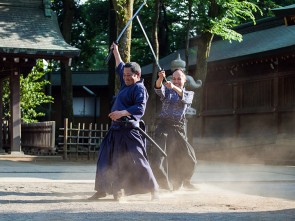 Vs. student Keiichi Okada for the Experience Suginami video 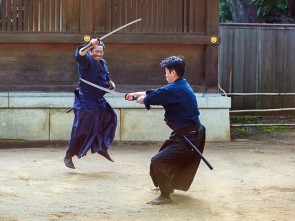 Vs. student Kaito for the Experience Suginami video 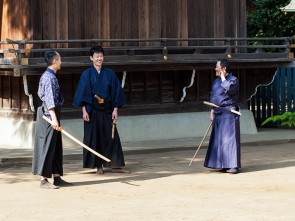 In between takes at Ogikubo Hachiman Shrine