The beauty of Asagaya in Suginami-ku is that you can enjoy many Japanese regional delicacies in the area instead of having to travel all over Japan, and Bar Kazu on Star Road is a great example. The manager at Bar Kazu, Kazuya-san, is a native of Niigata (on the Japan Sea side of Japan’s main island), and has worked in restaurants locally for many years. He wanted to open a restaurant that would promote healthy Niigata food and create an place where locals could come daily to enjoy a warm, welcoming environment. Along with Niigata cuisine, Spanish tapas are also served providing diners with enough variety to satisfy almost anyone. The atmosphere is a bright, cheerful, lively and welcoming place where visitors can meet with friendly locals. Most seating is at the counter but there are also two booths and one table outdoors for the warmer months. The staff is extremely friendly, accommodating and generous.

Niigata cuisine is known to be very healthy and nutritious and includes various meat and vegetable dishes, cheeses, as well as Koshihikari rice. Due to Niigata being a region that receives some of the heaviest snow in Japan, much of the food such as miso, vegetables, beef and pork, coffee and tea, are preserved in a process known as snow-aging in a snow-filled room called a yukimuro. The yukimuro has a consistent low temperature and a high humidity environment year round in a condition called seichi, which causes less stress on the food. The 200 year old snow-aging tradition is said to improve the taste, texture, smell and nutritional value of the food.

Some of the recommended dishes are noppe, a simmered home cooked dish with chicken, and various vegetables such as burdock root, shiitake mushrooms, taro root and carrots served in a light kombu (kelp) and soy broth topped with flying fish roe called tobiko. Other standouts are the Niigata grilled pork (raised in a healthy environment) that is first basted in a rice-malt miso paste called koji-miso, the one month snow-aged American beef, or the raw vegetables (sweeter because of the snow-aging) with miso and bagna cauda dipping sauces. Of course various Spanish tapas are also available as well. Drinks come in normal and extremely reasonably priced large sizes (two hands required) and include various beer, highball (whiskey soda), shochu, sours (shochu mixed with soda), plum wine, soft drinks, sangria, wine from various countries, as well as Niigata beer, wine, and sake. There are also various party courses available starting from 3000 yen. The menu on the website can be Google-translated for a basic understanding of what’s available. 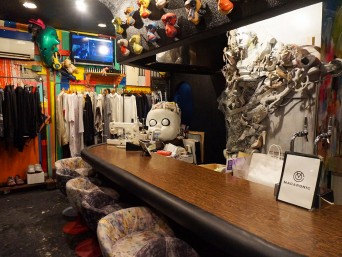 Koenji's Unique Bar and Brand Clothing Seller in One 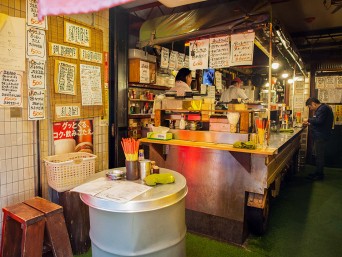