Hirozumi-san is a taiko drum master, starting from a young age and eventually mixing his taiko style with a rock sound. He opened the live Japanese music bar, Ryu Guw, on Look Street in Koenji. Since this is a one-of-a-kind place and he has a one-of-a-kind persona, we at Experience Suginami Tokyo thought he would be great to interview. He gave us a lot of information about his foundation, taiko, and Ryu Guw that we didn’t know. That interview is translated into English below. We hope you enjoy reading it!

Experience Suginami Tokyo: Thank you for having an interview with us. To start, please tell us a bit about your background, growing up.

Hirozumi: My parents were both Japanese taiko drummers. 8 months after I was born, my growing up with taiko began. When I was a junior high school student, I started a rock band, but decided to add Japanese taiko drums to the rock sound, and continued on with this sound. Now I still play with the same band, and we’ve been together for 22 years now. The band is called Gevil.

EST: I also heard you were doing some acting as well? What kind of roles did you play?

H: Yes, that’s true. Taiko started from a young age, and then when I started the rock band in junior high school, from about age 9 until age 19 I was also an actor in TV commercials and movies.
For example, I had a voice role in the Studio Ghibli films 'Porco Rosso' and 'Only Yesterday', and I was in commercials for Coca-Cola, Lawson, McDonald’s, and others. I was also in some NHK and Fuji TV dramas about 20 years ago. When I was 19 years old I stopped doing acting completely to focus on music. Since then it has remained my focus, and now I am still doing both Japanese taiko and rock music.

EST: Please tell us about your taiko style. It’s not traditional, is it? How did your parents and the traditional taiko community react to your style?

H: Well, the bass part is traditional, but other parts have been reconsidered to be able to mix well with a rock sound, in terms of the patterns and rhythm. However, I started out playing only traditional style, basically what you hear at matsuri, Japanese traditional festivals.
My family and the taiko community have been supportive. I continue playing traditional at festivals still, and I’ve also been playing taiko at Meiji Jingu Shrine (in Shibuya) for 20 years. So I play at both traditional events as well as Japanese rock “live houses”-- it’s just like flipping a switch. When traditional style players watch me, rather than say I’m “breaking tradition”, they are interested to see a different take on the instrument, and yet the bass rhythm I play is very traditional so they still understand the foundation very well.

EST: Taiko drumming is also connected with shrines and has a religious aspect, does it not?

H: Right. The taiko drum sticks are called bachi which has another meeting that comes from batsu, which is “punishment,” and like an exorcism or escape from evil. Since the drum head is made from animal skin it represents a beast, so striking the drum with the bachi carries a meaning of punishing the beast, and represents a purification from evil at Shinto Shrines, a sort of “sound exorcism."

As for in Buddhism, they have the Bon-Odori, a dance ritual dedicated to the souls of the dead, so this taiko “sound exorcism” is also used to drive out evil during the dance.

EST: “Sound exorcism,” huh, I like the sound of that. What do you hope to achieve with your Japanese music bar, Ryu Guw?

H: Well, I realized that around the world there are rock bars, jazz bars, and so on, but no “wagakki” (Japanese instrument) bars. There was no place to go to a bar type of atmosphere to hear taiko, shamisen, shinobue (Japanese flute), etc. and I found it peculiar that even in Japan there was no “Japanese-style” type of music bar, so I opened Ryu Guw 4 years ago to give Japan, and the world, the first of its kind.

EST: With that realization, did you ever have the fear that Japanese traditional music might disappear?

H: Yes, that is always a fear. It has become a kind of generational thing, perhaps. That is why even though the stage performances at Ryu Guw are exclusively traditional Japanese, the music played on the speakers in the bar is more along the lines of what young people listen to, thus making it easy for them to enter. Once they come in, then it is a chance for them to see the traditional Japanese music on stage, which they may have never experienced in this way. That is also kind of how the atmosphere is made in the bar.
The reason for making a “new style” of traditional Japanese music is also to prevent it from dying out, by keeping it fresh and relevant. That is something I also want to spread.

EST: Tell us more about Ryu Guw. Do you have different bands and performances daily at Ryu Guw?

H: Yes, but it is not limited to traditional Japanese music as there are sometimes acoustic guitar performances as well as scary story-telling events, cosplay events, and others. So even though Ryu Guw is not limited to genre, it is still limited to theme, so all performers will be wearing kimono or traditional clothing or find some other way to relate to the atmosphere of the bar. With this openness not limited to just music, we also can have events more often, usually every other day or so.
Usually it is 500 yen to enter, but on these event days it varies depending on the event.

EST: Why did you choose Koenji for the location?

H: As you know, Koenji is famous for its Awa-Odori festival, a traditional music and dance festival, which has 1 million visitors in that weekend every year. On top of that, Koenji is a musician’s town, with perhaps more musicians living here than any other area in Tokyo. I especially took note of the fact Koenji is famous for both rock music as well as the traditional side as found in Awa-Odori, which seemed perfect.

EST: Yes, Koenji is ideal for you in that respect. Could you tell us about some of your future plans or goals?

H: Aside from at Ryu Guw, I also plan to have many types of traditional performances at various locations, including abroad. So I want to spread the word about the performers who come to perform at Ryu Guw. I want to take them from Ryu Guw to the world. I would also like to open a wagakki bar like Ryu Guw in another part of the world. I hope to act as a producer in these various activities.

EST: Is there anything else you would like to say to our readers?

H: Yes. While many of the traditional styles of Japanese music, instruments, songs, and clothing like kimono are fading away, I think the current generation is one where we Japanese are realizing their importance and trying to keep them alive in our own special way. So we are at a cross roads where these traditions can either grow or die, and even foreign people abroad who love Japanese culture realize this and have formed their own taiko groups abroad, wearing Japanese kimonos while they perform Japanese taiko, so I truly believe that both in and outside Japan awareness and fondness of these traditions will increase. With a bar like Ryu Guw, I have faith that new generations of people will also come in and be a part of this experience.

So please visit Ryu Guw with an open mind and experience what we have to offer. 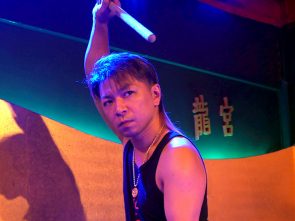 Hirozumi during a Taiko performance at his "wagakki" bar, Ryu Guw 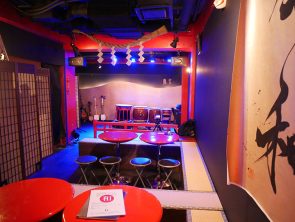 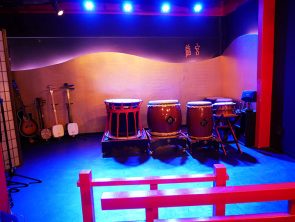 The stage of Ryu Guw, with many Japanese instruments such as taiko drums and shamisen

Hirozumi-san leads a life of taiko, inside and outside of Ryu Guw