Address:
A Symbol of Koenji

A Symbol of Koenji Near the Station
[published March 2020]

About 200 meters south from Koenji Station is Chosenji Temple, with its main gate standing in front of a wide street with many vintage clothing shops that Koenji is known for. Koenji is also known for its temples, however, and Chosenji is a prime specimen. Formally called Nichiouzan Ajain Chosenji. Niou statues stand at both ends of the gate painted in vermilion, glaring as if to drive off all evil spirits.

The main temple building is said to have been made during Muromachi Period (1336-1573), and is registered as the cultural property by Suginami Ward. However, the original building along with the study hall and residence building were all destroyed by an air raid in the spring of 1945 during the War. However, the head monk of that time jumped into the blazing building and managed to rescue the Main God statue made of wood. Although it is only 55 centimeters tall, it has an overwhelming presence.

According to the History of Suginami, Chosenji was founded in 1704 by the priest Shinshu of Meiouzan Hosenji Temple in Nakano. This was around the time when the Revenge of the 47 Ronin occurred. The main building burned down twice, in two fires in 1796 and 1945, so no precise record remains about the history of the temple. A geographical book edited by the Tokugawa Shogunate reports that, “details of the foundation of the temple are unknown.” The present head monk of Chosenji has remarked that the temple must have been founded earlier than 1704, since the gravestone of the first known monk of the temple dates back to 1651.

The current head monk introduces the ‘Tooth God’ in the compound to us. He says that a lot of people visit the temple to see the stone image. It is Nyoirin Kannon, Bodhisattva Compassion. The Kannon tilts his head to his right side, held with his right hand as if wondering how he can save people or how he can grant their wishes. But the people in the past interpreted the posture differently, that he was in pain with a toothache, and they thought the Kannon carried the burden of peoples’ toothaches. The Kannon is still very popular as the ‘Tooth God’ to relieve toothaches.

Chosenji offers use of its large compound to Koenji’s 4 Big Festivals: Koenji Awa-Odori Festival, Koenji Fest, Koenji Engei Festival, and Koenji Bikkuri Street Performance. All year round, however, you can enjoy the seasons here, with lush greenery, spring flowers and autumn leaves. This is a recommended spot to stroll through for calm and peace of mind. 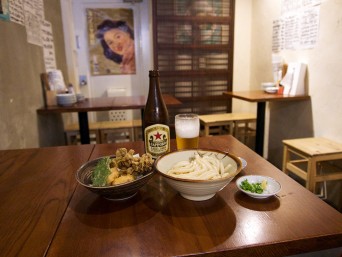 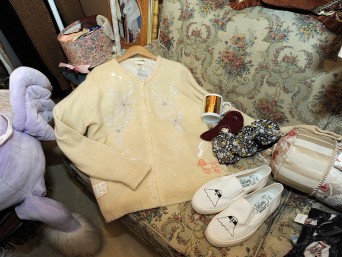 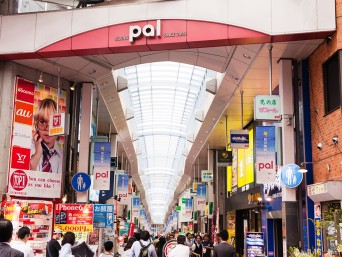